The Welland Tennis Club celebrated its 100th anniversary in 2013. This milestone is particularly remarkable because the tennis club has survived and prospered despite the decline of industry in the city and through a period where tennis clubs in the surrounding area, even those in larger communities, have struggled.

Welland is known as the city where rails and water meet. At the end of the nineteenth century and into the beginning of the twentieth century, Welland was a bustling industrial town. Hooker Street, where the club is located, is named after the Hooker family who founded the brick works there in 1865, and who lived just a stone’s throw away in a house overlooking the then McCuaig Tennis Lawn (at the corner of Frazer and Bald) and the Welland Canal.

It seems that Mr. D.W. Hooker may have been a tennis fan. In the late 1890s, when the Canadian Open was held in Niagara on the Lake at the Queens Royal Hotel, Mr Hooker would stay at the hotel. He can even be seen watching tennis in a photograph taken of a match between Miss May Sutton of California and Mrs. Hannam of Toronto. Ownership of the brick factory was later taken on by his son Mr. D.D. Hooker, who was a member of the town council and Mayor of Welland from 1898-1899.

When the brick factory closed, Mr. Hooker donated the land on which the brick factory stood to the city, in perpetuity, for recreational purposes. The Welland Tennis Club was formed in 1913 by Doc Grassie, Percy Williams, Charlie Coulson and local businessmen on the site of the old brickyard. European style red clay tennis courts are built with brick dust. As the site of the new Welland Tennis Club was already full of fine brick dust, the decision to build clay courts was straightforward and these red clay courts are still in use today. Nowadays when the club needs to replenish its supply of brick dust they are able to acquire it from a company in Peterborough, ON.

In the early days of the club, Welland members used to participate in the tournaments and events held at other clubs in the area such as the Highfield Club in Port Dalhousie, the Fort Erie and Ridgeway Tennis Club and the Thorold and Merritton Tennis Club. Bowling was also a very popular sport in those days and early pictures of the club show the four clay courts, a bowling green and a small clubhouse in the same location as the current building. The original clubhouse cost $300 to build and the club had to repay the city $50 a year.

Welland Tennis Club has many notable members, who are recognized with plaques in the clubhouse.

The House That Dutchy Built

As road transportation became increasingly popular, Welland’s prosperity declined and the tennis club’s facilities with it. By 1958, when Dutchy Doerr first came to the club, it was in a sorry state. The fencing was almost non-existent, the courts had not been properly maintained, the club house was a shambles. It was time to reclaim the club. With help from members such as Eleanor White-Pover, Don Carroll and with help from the city’s Parks and Recreation department, the fences were restored and En-Tous-Cas came to rebuild the courts. It was just in time. In 1965 there was a proposal to build apartments on a site which included the club’s land. Fortunately, the club Board was able to make a good case for continuing and shortly afterwards, the clubhouse was expanded and renovated.

The Welland Tennis Club web site refers to the club as “The House That Dutchy Built”. Dutchy Doerr became head professional of the club in 1969, when the club had just 60 members. At its peak in the seventies membership rose to 689. Despite his retiring to London, Ontario in 1992, at the age of 71, Dutchy’s influence is still felt in Welland and he makes a point of visiting old friends there regularly.

When you meet Dutchy you realise he really likes people and it’s clear that he inspires them to love tennis and to do their best. He’s not afraid to ask people to get involved whether it is to play tennis, by entering a tournament or to make up a four, or to ask them to get involved in an off court project that will improve the club. No matter what their playing ability, there wasn’t a member that Dutchy wouldn’t encourage to participate. No matter how many telephone calls had to be made, no matter how much cajoling it took or how many introductions were needed, Dutchy would get people out on the courts and make sure it was an enjoyable experience for them.

The Club had always hosted social tournaments and invited players from other clubs. Dutchy expanded the scope of these tournaments to include singles and people came from far places like New York City, Detroit and Ottawa to participate. Most of Canada’s top players came to Welland to play and the Rose City Open was a major event on the tennis calendar.

Club tournaments were run on a triple knockout basis. Everyone would start in A division, a loss would move them to B division and a further loss would put them into C division. This not only gave everyone a guarantee of three matches, it meant players would meet other members of the club who they might not under normal circumstances face on the court. Dutchy insisted that the prizes were the same for all three divisions.

Dutchy involved lots of young people in the running of the club, both as court monitors and to run junior lessons and camps and in this way he inspired many young people at the club to do well in their chosen field, whether it involved tennis or not. Stacey Allaster was a court monitor at Welland at the age of 12, she is now one of the most influential people in professional tennis as the Chair and CEO of the WTA. Alison Hannah was one of Dutchy’s protégés and, despite living in England and being married to British tennis great Roger Taylor, Alison comes to Canada regularly to play events. She is the Over 45 singles champion and represents Canada in ITF World Team Events.

Under Dutchy’s tutelage, Welland Tennis Club developed young players who would win Under 16, under 18 and under 21 national titles, and who would become Canada Games gold medallists and All Americans. Eight players were offered tennis scholarships to American Universities and six took up the opportunity. All this is remarkable record for a city with a population of just 45,000.

It was in 1972 that the last lake freighter sailed past the tennis club. That stretch of the Canal is now a recreational waterway and an open air auditorium has been built on the opposite bank, bringing a more relaxed air to the site which was once surrounded by industrial and institutional buildings.

As soon as you walk into the club house, you know you are in a friendly place that values its past and its future. Pictures of the youngsters in the tennis camps from the seventies to the present day are posted around the clubhouse above the windows. Returning members look for themselves in the photos and point them out to their friends. The kids who learnt to play at the club often leave, whether for education or work, but if they stay or resettle in the area, they come back to find the welcoming nature of the club is a constant.

A recent aerial view of Welland Tennis Club and the adjacent recreational waterway, which was once part of the Welland Canal.

An impressive trophy case, along with the clubs many trophies, fills one wall of the club house. There are a number of plaques and photos recognizing club members on display. There’s one for Eleanor White-Pover, who was the club secretary and sometime treasurer from 1957 to 1974 and who won multiple club and Ontario championships. There’s one for Brian Gyetko who grew up at the club. Brian won the Sun Life Nationals in 1990 and went on to be named an all-American at Arizona State and to represent Canada in the Olympics. Another photo honours a young Frank Dancevic, a recent one details Stacey Allaster’s achievements and others recognize the contribution of various club Presidents and players.

Welland is indeed fortunate to have a council that has always been prepared to work with the club. This has meant that the club now reaps the benefit of attracting members from surrounding towns. In 2005, an application was made by a developer to rezone the tennis club site for a condominium. The city council, citing the fact that the land had been designated in its bequest as for recreational purposes, unanimously rejected the application. Additionally, the city has recently built an indoor soccer and tennis facility. The four indoor courts will be managed as part of the tennis club. This support will serve to strengthen the club and assure its future.

Self appointed club historian Tady Saczkowski, through research in newspaper archives and historical societies, has unearthed many old photos of the club and tennis players in preparation for the 100th celebration. Many of these photos are now displayed in the clubhouse. Tady has also made sculptures of tennis racquets to hang on the clubhouse ceiling on either side of the magnificent fireplace that dominates the great room in the clubhouse. One is made with wooden racquets and one with more modern frames and both include red roses for the Rose City.

The formal celebrations were held on August 24th and the sun shone brightly on the courts and the assembled company. In the morning there was a junior round robin and exhibition match. Just after 2pm the club President, Chris Zanuttini, welcomed all the members and guests and read congratulatory messages from Governor-General David Johnston and Prime Minister Stephen Harper. Welland MP Malcolm Allan brought greetings on behalf of the federal and provincial governments.

Zanuttini then introduced Welland Mayor, Barry Sharpe, a former President of the club, followed by the various Past Presidents and Board members of the club who had assembled, many of whom shared brief reminiscences about their time at the club. Several had been members of the club since its revival in the late 50s, including Diane McIver who had joined as a junior in 1958 and still plays frequently at the club. Henri Louis St. Martin talked a little about how 200 members of the club turned out to the meeting when rezoning was discussed in 2005. Before the toast to the club and the cutting of the cake by Dutchy Doerr, Zanuttini recognized the current Board members, the current long-time club head professional, Dave Boland, and thanked the members themselves for all contributing to the success of the club.

With the formalities over, the exhibition matches, tennis round robin and socialising continued for the balance of the afternoon. The friendly atmosphere that has made this club so popular in the Niagara region was apparent. Visitors and members alike enjoyed watching from the covered patio overlooking courts 1 and 2 and Dave Boland got as many people as he could out on the courts, keeping up the tradition of taking the time to make sure everyone at the club has an enjoyable experience. It was a privilege to witness such a well organised celebration.

Congratulations go to the members of the Welland Tennis Club for keeping the community spirit alive for 100 years and for making this hidden gem with its red clay courts and friendly atmosphere a great place to play tennis for the next 100 years. 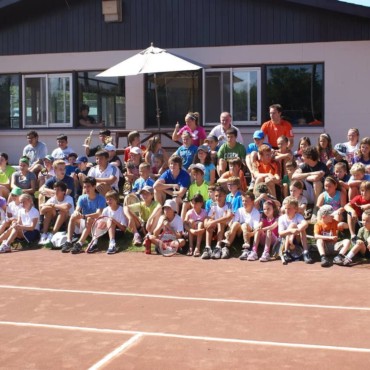